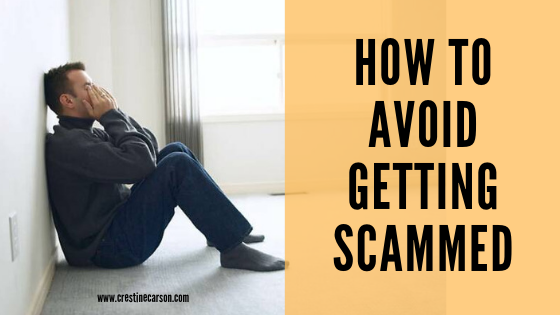 I know it’s too good to be true but ewan ko ba naniwala pa rin ako.

Kaya if it’s TOO GOOD TO BE TRUE, IT’S PROBABLY not TRUE ! I’ve learned a BIG LESSON and thank God I’m now financially educated with the help of the Truly Rich Club founded by Bro. Bo Sanchez. Kaya I wanna share to you an blog written by my favorite mentor Bro. Bo Sanchez.

How to Smell a Scam a Mile Away

Here’s the first rule of money: If you earn it, don’t lose it. I’m telling you this because there have been many financial scams in the Philippines. You need to learn how to protect yourself from a scam. It’s useless to earn good money and then lose it all to a financial fraud.

Here are the six signs of a scam

Multitel (Multinational Telecom Investors Corp.), started by Rosario “Rose” Baladjay, was probably the biggest scam in Philippine history. Some news reports say that two million people invested in this company—which probably reached P100 billion. Reason: This company accepted small investors—even as small as P10,000. This company was so believable, they got many military and police officers to invest. Why?

Multitel promised four percent to five percent interest a month. They also had another offer where you could double your money in 18 months. Did you notice? That’s 60 percent growth a year. That’s what I call an insane interest rate. Insanely high interest rates means a pyramid scam is going on: The company gets money from new clients to pay off the interest of old clients. (This is what you call a Ponzi scheme, named after one of the most celebrated scammers in the history of America, Charles Ponzi.)

This charade continues until there isn’t enough new money to pay off the interest rates of older clients. Soon, everything implodes.

For example, Rose Baladjay started by promising 1.1 percent a month interest to her investors. But by its very structure, you’ll need more and more money to pay older clients, so Multitel had to keep raising the interest rates to attract more customers. Soon, it promised five percent returns a month.

But after Multitel was shut down by the government, people didn’t learn. Cyrus Yap Hao, who worked with Baladjay in Multitel, set up his own pyramid scheme. He founded Royal Manchester Five (RMF). His company promised insane high returns as well—and many more were duped and lost their money. Through Powerhomes, they dangled the promise of P3 million in earnings plus a house and lot. Around P2 billion of clients’ money was lost in RMF.

In 2008, FrancsSwiss did the same thing. It promised four percent a day for 60 days straight or 270 percent returns. But despite the insanity of those interest rates, many executives and celebrities were lured into its bottomless pit. (I know of one Vice President who sent them P10 million and lost it all.)

Remember, if the promised interest rates are too high, stop. There’s something fishy going on.

Aside from the ones I mentioned above, there have been many other scams in the country and all of them have been “successful”. Unfortunately. Companies such as Performance Investments Products Corp (PIPC), MMG Holding, Tibayan Group of Companies, Legacy Group, Maria Theresa Santos Trading, etc..

Biggest Reason: Filipinos are financially ignorant. We think everything works like a bank. We reason, “If a bank can give me a guaranteed interest rate, these investment companies can also do so…”

That should have been a red flag. But people didn’t see it. Three of my friends invested in Legacy Group. They reasoned, “It’s a bank. As long as my money is below P250,000, my money is insured. I’m covered by PDIC.” Sounds terrific. But when the collapse came, one of my friends had to wait for more than a year to get her money back.

3. You Can’t Understand How They Earn Money

Not one of the companies above could explain how they could earn such high returns. Some will try to explain their investment strategies in esoteric language specifically for the purpose of confusing you.

For example, Royal Manchester Five said that they grew their clients’ money by trading in European currencies. But that’s impossible. Anyone who has done foreign currency trading knows that it’s highly volatile.

(My mentor says that 97 percent of people who trade in foreign currencies lose their money.) Most of these pyramid companies hire salespeople to invite people to invest their money. These sales people are usually investors themselves. And they earn one percent to 20 percent commissions from the money being invested.

Most of these sales people are very sincere. They really believe in the company. They don’t know it’s a scam. So they believe they’re doing their friends a favor by asking them to invest in these companies.

So when you ask these sales people (usually called counselors), “How can the company earn such big amounts?” they’ll never be able to answer your question. Because they themselves don’t know. They’ll usually say, “I don’t really know how they do it. It’s too complicated. Something about European currency trading. But it must be fantastic. All I can tell you is that it works. I’ve been investing with them for three years now and I’ve been getting my interest checks every month like clockwork…” And then tragedy strikes.

There are other kinds of scams. One day, a man came up to me and said, “Brother Bo, I received an email telling me that I was chosen to be the recipient of a huge inheritance money from a British lady who had no heirs. It’s worth 1.2 million pounds. When I receive it, I’ll donate half to your ministry.” Groan. Gently, I told him that it was a scam. He said, “But what if it isn’t a scam? I’ll lose the 1.2 million!”

I told him to go ahead and find out for himself. I warned him, “If they ask for money, it’s a scam.” The following week, he told me with a sad face, “You were right. It was a scam. I called up the number of the attorney. The guy asked me to send him $400 to expedite the transfer of the inheritance money to my account.

And to think that I almost fell for it…” In another scam directed to OFWs, a text message was sent to them, saying, “Congratulations! You’ve just won $40,000 in the lotto…” The lotto was reportedly sponsored by then President Gloria Macapagal Arroyo for OFWs. But to claim their prize, they needed to send some dollars to Western Union—so they could remit the prize money from the organizer, which was supposed to be the GMA Charity Foundation.

None of these were true. But some Filipinos fell for it. If it’s too good to be true, stop!

5. They Seem to be Good and Credible People

The people talking to you about the scam could in fact be very nice, honest, and kind people who wouldn’t hurt a kitten. But they could just be as ignorant as you are. In the Royal Manchester Five scam, the top sales managers were Born-Again Christians. They believed in their company so much, they asked their religious friends and even churches to invest. Some, however, may just be very good pretenders.

Example of someone who seemed to be very credible? Bernie Madoff. In the biggest and longest-running scam in America, Madoff wasn’t only seen as a good guy, he had all the credentials. He was former chairman of NASDAQ stock exchange.

He was so believable, his Ponzi scheme lasted for possibly 30 years. Because of his reputation, Madoff was particularly attractive to very wealthy investors. When his entire operations fell, reports say that his clients lost $65 billion.

6. Your Financial Advisor and Financial Manager Are the Same Person

I love what I do in TrulyRichClub. Because I’m your financial mentor, coach, advisor, teacher, sensei… But I don’t hold your money. Instead, I ask you to put your money in the stock market specifically in gigantic companies like JGS and MBT and BPI… (Even Citiseconline doesn’t hold your money. They’re just a middleman receiving your money and sending it over to the giant companies you buy.)

Do you see the difference? If it’s a scam, your financial advisor is also your financial manager. He holds your money. He invests it. He has full control over it. Theoretically, he can run away with it.

Example of a very dangerous situation: I manage the money of my older aunts and uncles (age 80+). I do it because at their age, they have no choice. I love them. But what they’re doing is dangerous. If I was evil, I’d spend their money—and they won’t be able to do anything about it. Thank God their nephew’s a good person. Handsome too, but let’s not go there.

Smaller Bottomless Pits You may not have fallen into these big scams above. But have some relatives or friends asked you to invest in their businesses? And has your money vanished into thin air? They weren’t scammers. They just didn’t know what they were doing. Don’t blame them.

Who’s to blame? You. (Sorry. I love you.) You turned over your money without due diligence. You didn’t read their financial statements. You didn’t research about the industry. You didn’t ask mentors who are familiar with the business.

You abdicated your responsibility over your money. I speak with bluntness because I did these foolish blunders myself. Many times! (I was hardheaded.) I’ve lost millions doing this silliness.

But today, I’ve learned my lesson. Finally! I don’t do it anymore. I’ve decided to keep my investing very simple now. So today, I invest in two things only: First, I invest in my personal businesses, where I’m in full control of the money. If I’m not in control of the money, I don’t put in my money. Second, I invest in the stock market. I buy gigantic companies. Even if I’m not in control, it’s okay, because those who are in control are legends like Henry Sy, John Gokongwei, and Jaime Zobel, etc. When you invest in the best companies in the stock market, you partner with business titans.

Because of these two simple decisions, my money has multiplied tenfold. Keep away from scams. Keep investing simple. And your money will multiply as well.

May your dreams come true,

How To Shift from OFW to Entrepreneur

Housemaid Turned Multi- millionaire in the Philippines ( A True Story)

How to become a multi-MILLIONAIRE easily!